Parallel 49 was one of Vancouver’s craft beer pioneers. Although these days it seems like there’s a craft brewery on every other block, when Parallel 49 Brewing opened their doors well over a decade ago the craft beer craze was only beginning.

By combining quality ingredients, a relentless drive for innovation, and a bold brand, Parallel 49 has established itself as one of Vancouver’s most identifiable beer brands, both locally and internationally.

Initially, they could only operate as a brewery and store where people could drop by, buy their beer and take it home with them. However, liquor laws changed in 2017 and allowed breweries to serve food and alcohol on site. With this change, converting into a restaurant became a revenue and brand-expanding opportunity that was just too good to pass up. 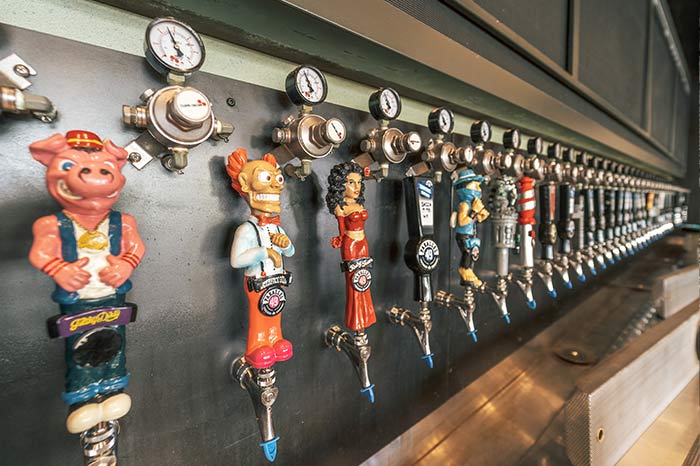 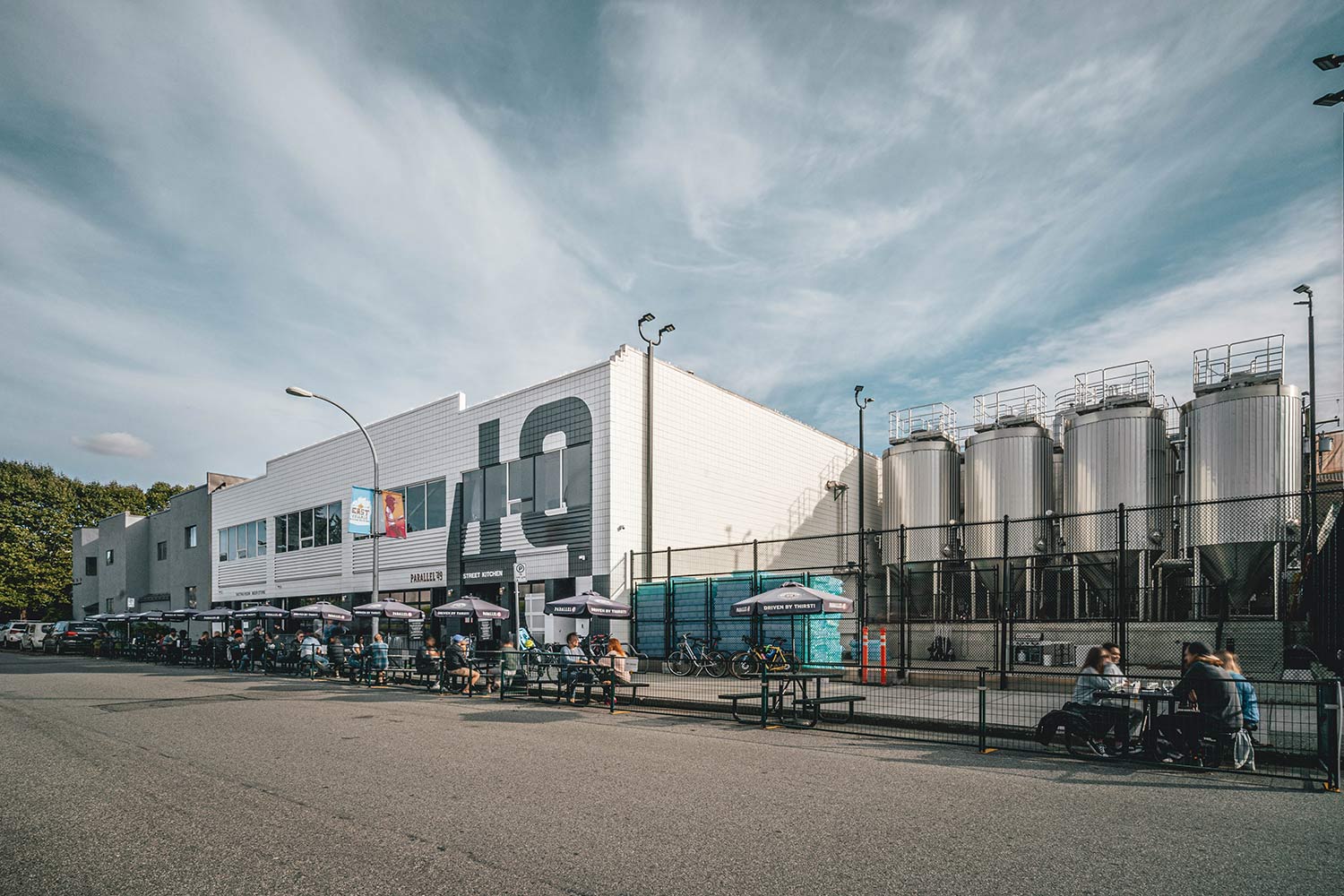 The task of converting a building built for industrial use into the quintessential P49 beer tasting and dining experience presented us with two main challenges.

The first challenge was structural because the brewery operated inside an older facility, so any major renovation would require an overall structural upgrade to bring the building up to code with modern building standards.

The second challenge was to create a dine-in experience that fit the Parallel 49 brand. We loved the unapologetically loud, in-your-face brand they have built over the past decade. With beers like the “Filthy Dirty IPA” and the “Jerkface 9000 Wheat Ale,'' it was an exciting challenge to create a restaurant/tasting room as bold and on-brand as the beers being sold.

To create space for the dining area, we moved two central stairwells from the middle of the structure to the sides. We also installed a building-wide system of interlocking steel beams to get the building up to code.

The steel beams wrapped around the entire building, which was a necessary improvement in order to bring the older industrial building up to modern building codes. This presented us with a challenge as the brewery in the back needed to continue to operate, even as we did major construction to the building interior.

The key to our success with this challenge was the clear communication, coordination, and planning between the Mercury team and the brewery’s staff to ensure that an entire building retrofit could be carried out without any significant interruptions to the facility’s ability to produce beer. 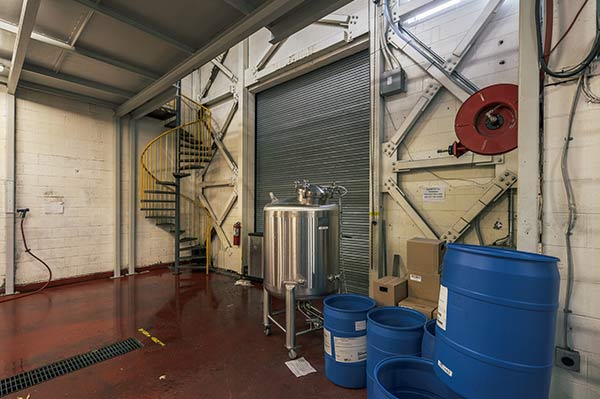 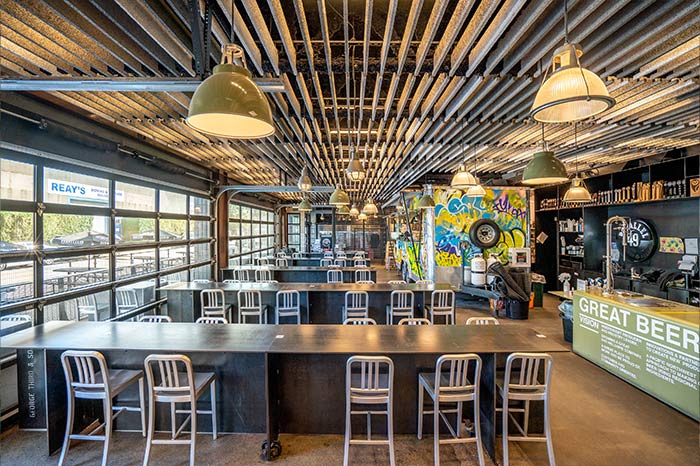 Working with Measured, the architecture firm behind the design, we built a striking dining area that captured the tough, working-class mixed with punk design aesthetic that the brewery is known for.

The centerpiece is a fully operational food truck covered in graffiti located within the dining area. This food truck brought the energy and excitement of an outdoor block party into the comfortable indoor dining space.

Creating an authentic food truck dining experience created a unique challenge since the truck was not just for show but also acted as a fully operational kitchen. We determined that the most efficient way to do this was to build out the entire food truck and kitchen off-site. While on-site, we installed all the necessary gas, electrical, and plumbing connections on the ground, where the truck's underbelly would be placed.

Once both pieces were finished, we could simply roll the truck in and connect and anchor it into its custom floor mount. This allowed for the visual appearance of a mobile food truck while the kitchen inside had all the infrastructure of a standard restaurant kitchen. 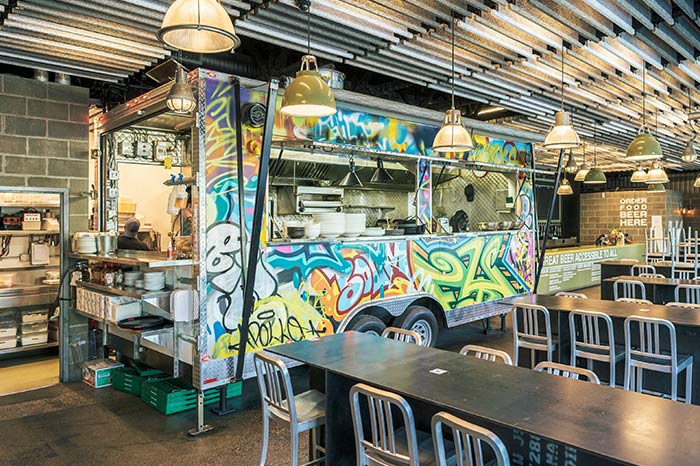 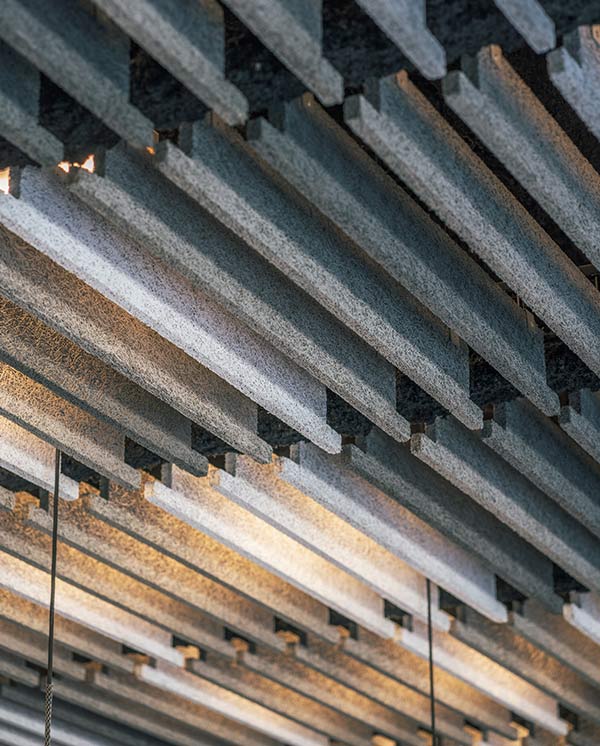 An aspect of restaurant design that is often overlooked is how the space interacts with sound. While the hard, industrial materials that make up the dining room are perfect for the room’s aesthetic, the room would become an acoustic nightmare without a good sound dampening solution.

Hard surfaces such as metal and concrete are prone to create echoes. When combined with a packed dining area, the echoes would result in an excess of distracting noise for customers.

Measured created a creative and aesthetic solution using Tectum Ceiling Panels. We used four-by-eight-foot sound-absorbing sheets, cut them up into strips, and painted them different colours. We molded them together and built them into an assembly from the ceiling, which helped dampen the sound while keeping with the textured, industrial design aesthetic.

The building’s exterior has a bold, high-contrast look. With black and white tiles running the length of the building and an iconic “49” that extends the entire height of the two-storey building, it is impossible to drive by without taking notice.

The newly installed steel cross beams can be seen though the second floor office windows. Serving both aesthetic and function, these beams add to the building's industrial look and blend in seamlessly as if it was a part of the building's original design.

In addition, a series of street-facing roll-up garage doors allow the dining space to be quickly converted from a climate-controlled indoor area to a seamless open patio floor plan. The new floor plan allowed the entire first floor to be dedicated to the restaurant/bar and a liquor store, while the second floor consisted of office space for the business's day-to-day operations. 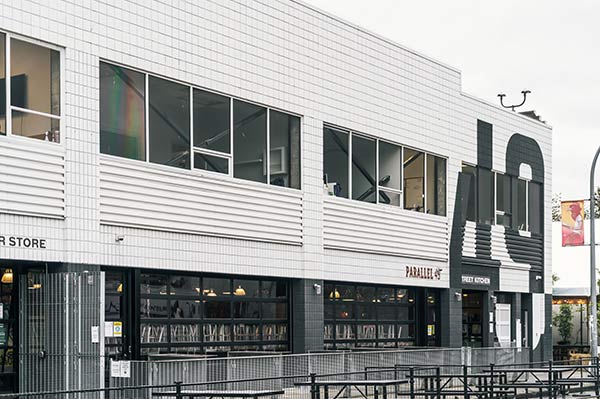 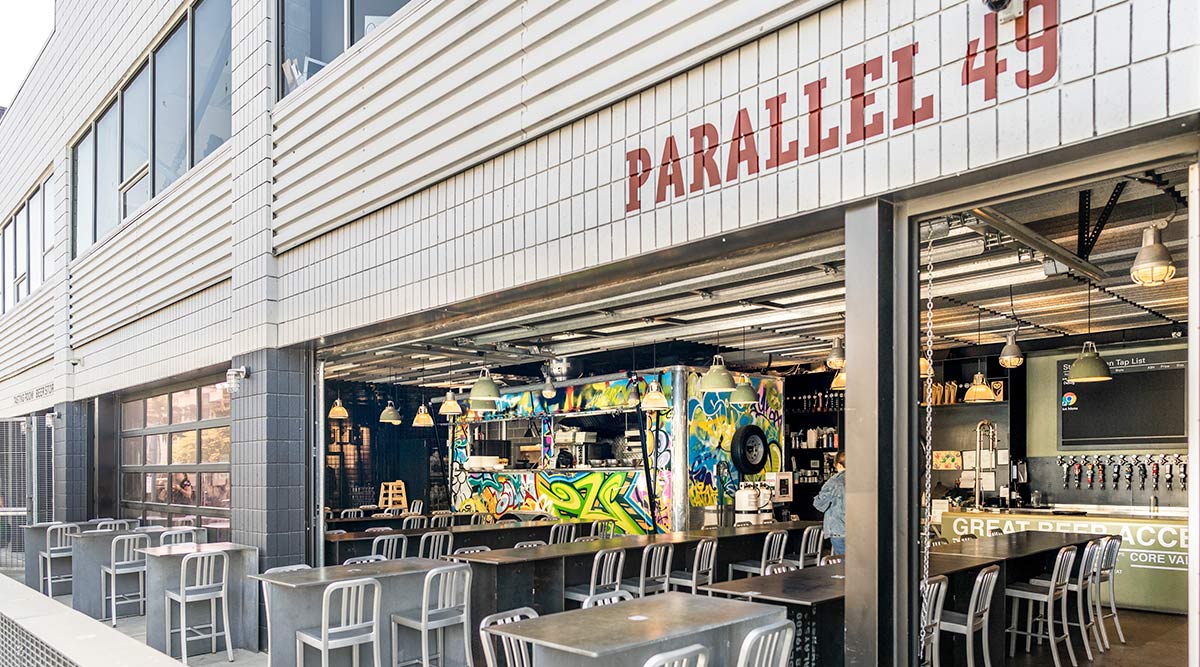 We are very proud of the final product. Measured did a fantastic job of tying the entire space together. We worked with them to help capture the brand with materials that spoke to the brewery's identity. This was an incredible build, with a fantastic team who brought it together. Over five years later, this place looks as good as the day it was finished.

We look forward to enjoying many Parallel 49 products in the future!
‍
You can visit the P49 restaurant brewery at:
1950 Triumph St, Vancouver, BC V5L 1K5